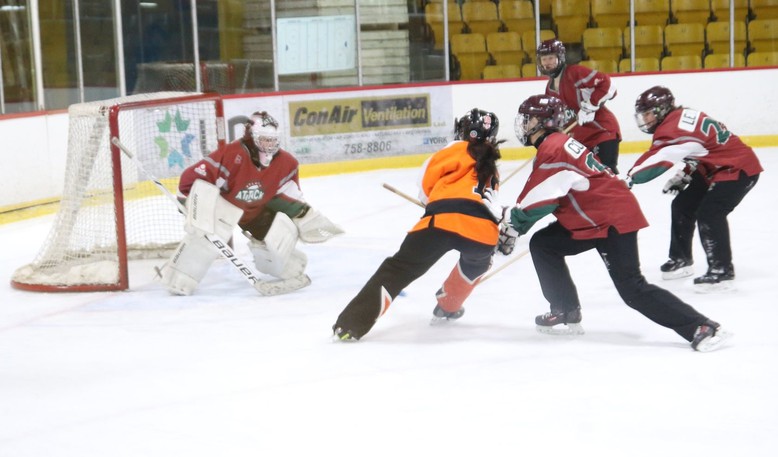 Ringette is a Canadian invention that has become one of the fastest team sports on ice. Sam Jacks, a recreation director and sports enthusiast from North Bay, Ontario, invented the sport in 1963 when he saw the need for a winter team sport for girls. Interestingly enough, Sam Jacks was also responsible for the development and introduction of floor hockey in 1936.

Since the early 1960s, the sport has continued to grow and currently boasts nearly 32,333 registered players on nearly 2000 teams, with over 8000 coaches and over 1700 officials. While it is primarily a female sport, there are currently over 700 males playing ringette across the country.

Ringette, like hockey, is played on ice with skates and sticks with six players per team on the ice at once. The objective is to score goals by shooting the object of play into the opposing team’s net at either end of the rink during stop-time periods of play. But this is where the comparisons between ringette and hockey really end. The stick is straight. The object being pursued by the players is a rubber ring, not a puck. There is no intentional body contact. And the rules of ringette make it a wide-open and dynamic sport.

The emphasis is on play-making and skating skills. Players cannot carry the ring across the blue lines on the ice. Only three players from each team, plus the defending goalie, are allowed in the end zones at the same time, which keeps the play open, puts a premium on sharp offensive moves, and requires defending players to skate close to their opponents. These features of the game demand the development of keen skating skills that give ringette players fantastic skating speed and agility.

In 2000, a 30-second shot clock was introduced to make the game even faster. The shot clock starts when a team gains possession of the ring, and if they have not taken a shot on the net within 30 seconds, a buzzer sounds and the ring is then awarded to the opposing team.

Internationally, ringette is played in a number of countries around the world, including Finland, Sweden, the United States, France, Slovakia, Russia, the Czech Republic, and Abu Dhabi.

Since 1990, a world ringette championship has been held on a regular basis, with Canada and Finland being the predominant challengers.

Over the years, ringette in Canada has noted many achievements and accomplishments. These include the establishment of a Hall of Fame, which recognizes outstanding ringette achievements and contributions to the development of the sport; the introduction of a successful junior and senior National Team Program; the development of programs such as the National Coaching Certification Program and the National Officiating Certification Program; the development and implementation of a comprehensive Long Term Athlete Development model and a Come Try Ringette recruitment system; and an expanding National Ringette League.

Ringette tournaments abound. There are local and regional invitational tournaments throughout the season. University teams play competitively across Canada. Most of the provincial and territorial associations hold an annual championship tournament. Ringette has had a presence at the Canada Winter Games since 1991. And the Canadian Ringette Championships have been held every year since 1979.

Manage your identity from the palm of your hand to the top of your desk.